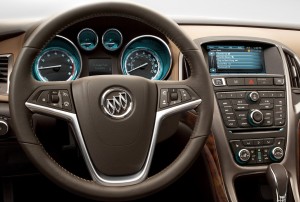 When the Buick Verano arrives in Columbia, South Carolina in the later part of 2011, it will offer Columbia Buick drivers all the premium technology features expected by Buick shoppers.  Verano builds on the foundation laid by the Buick LaCrosse and Buick Regal with a host of features designed to connect, inform, and protect the driver.

Comprehensive connectivity is enabled by OnStar’s remote vehicle access, which makes keeping tabs on the vehicle a breeze from anywhere with a smart phone running either Android or iOS. Highlights of the features offered by the 2012 Buick Verano include:

Downloading an OnStar app to your smartphone enables the use of remote vehicle features from anywhere in the world. With a few taps, customers can check the:

In addition, the OnStar application allows users to remotely lock, unlock, and start the Verano no matter where they are, in addition to viewing its present location.

The next-generation radio system found in the Verano includes a navigation system, along with USB and auxiliary input jacks, and includes full Bluetooth with streaming audio, structural speech recognition, SMS texts and more. Columbia Buick drivers will find additional connectivity features include text-to-speech conversion of SMS texts, integration with smartphone apps like Pandora and Stitcher, among others, and Gracenote music organization for external devices (USB drives, etc.), including Playlist Plus and Album Art features.

Safety is another component in Verano’s technology story. Primary features include:

The 2012 Buick Verano will arrive in the fourth quarter of 2011.  When it goes on sale, you can find it at Jim Hudson Buick in Columbia, South Carolina.  Jim Hudson is the oldest Buick dealer in Columbia, with many years serving the needs of Columbia drivers for both sales and service.  Jim Hudson has been voted Best New Car Dealership in Columbia an unmatched ten years in a row by readers of The State, a testament to Jim Hudson’s commitment to complete customer satisfaction before, during, and after the sale.  Jim Hudson Buick is located at 7201 Garners Ferry Road in Columbia and can be reached by phone at (803) 783-0110.