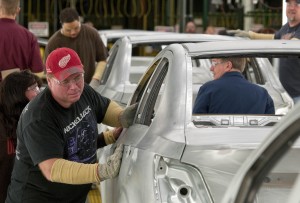 When production begins on the 2012 Buick Verano later this year, Columbia South Carolina drivers can take pride in its origins.  Verano will be built in General Motors’ Orion Township plant, a plant that has been upgraded to receive some 40 percent of its energy needs using gas from a nearby landfill.  The gas is burned primarily to create steam for the plant’s heating and compressed air systems, meeting their needs for production while releasing fewer greenhouse gases, sulfur dioxide, and nitrogen oxides…oh, and saving roughly $1.1 million annually.

The Buick Verano plant’s energy-saving efforts don’t just stop at talking trash; an upgraded lighting system in the plant allows workers and supervisors to monitor their energy consumption hourly and adjust their equipment shut-down routines to save over 5,944 megawatts of electricity every year.  The plant’s upgraded paint shop now uses a waterborne base coat, which eliminates the need for a primer oven while also creating a more premium finish.  Heated by a combination of natural and landfill gas, it cuts the energy use of the old paint shop in half. If one were to combine all the greenhouse gas savings created in the new plant, it would be a total of 80,000 metric tons when running at full capacity, or the equivalent of 14,000 cars per year; the electricity savings can power 3,500 homes.

Beyond energy savings, Buick engineers are working to use smarter materials when producing the 2012 Buick Verano.  Cardboard packaging used at Orion and other GM plants is processed with used denim to create parts of Verano’s sound insulation to ensure that its interior is library-quiet, a hallmark of Buick’s exceptional quality and just what it needs to highlight the new IntelliLink touchscreen radio system backed with connectivity through OnStar.

Production of the 2012 Buick Verano will start later this fall, with the first models arriving by the end of the year.  When they arrive in South Carolina, they will be available from Jim Hudson Buick, the #1 Buick dealership in the state of South Carolina.  Jim Hudson has been serving the midlands, including Sumter, Orangeburg, and Newberry, with a focus on complete customer satisfaction for over 30 years.  Located at 7201 Garners Ferry Road in Columbia, Jim Hudson Buick carries a wide selection of Buick models and will expand it even further with the addition of the Verano.  For more information, call Jim Hudson Buick toll-free at (888) 377-4971, or visit their Buick Dealer Columbia SC website.