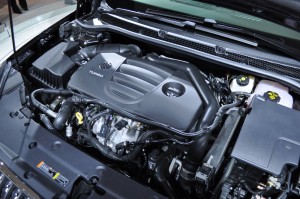 Edmunds Inside Line highlighted one new unveiling at the New York International Auto Show, where Buick highlighted the forthcoming Buick Verano Turbo.  Not content with the 177-horsepower 2.4-liter engine that will come in the standard Verano, Buick engineers have lifted the turbocharged 2.0-liter four-cylinder engine from the forthcoming Buick Regal GS and made it fit in the smaller Verano.  The Regal GS is rated for 255 horsepower; Edmunds estimates around 250 in the Verano, which should be good for an estimated 0-60 time of 6.5 seconds with a six-speed manual transmission, a second and a half quicker than the standard 2.4-liter engine while retaining fuel economy ratings of around 30 highway miles per gallon.

In addition, Edmunds was able to spend a little time sitting inside the 2012 Verano and found the front seats comfortable and that the back seat offered adequate amounts of legroom for their adult-sized frames.  Buick also announced at the show that the Verano will start well below the price of the Buick Regal in Columbia, South Carolina, and that the turbocharged version will still come in below the $30,000 mark.  The 2.4L-equipped Buick Verano will be available in Columbia starting later this year, while the Buick Verano Turbo will probably become available in the second half of 2012 as a 2013 model year vehicle.

Jim Hudson Buick in Columbia is the #1 Buick dealer in South Carolina, serving the entire midlands of South Carolina including Newberry, Sumter, Orangeburg, and Lugoff with a commitment to complete customer satisfaction.  With over 30 years of experience, Jim Hudson has been voted Best New Car Dealership ten years in a row by readers of The State.  Jim Hudson carries a full lineup of Buick luxury cars and SUVs, and will offer the Buick Verano once production begins later in 2011.  Jim Hudson Buick is located at 7201 Garners Ferry Road in Columbia, just off I-77, and can be reached by phone at (888) 377-4971.