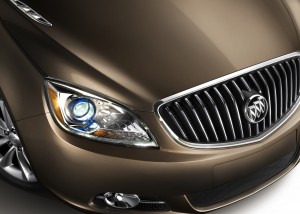 Jim Hudson Buick, the premier Columbia Buick dealer, announces the 2012 Buick Verano that will be coming next year to Columbia, South Carolina.

Verano is a premium compact sedan that joins the fastest-growing mainstream brand in the United States, a brand reinvigorated by the fresh designs of the LaCrosse, Enclave, and Regal over the past few years.  The successes of LaCrosse and Regal, as well as the GMC Terrain five-passenger crossover, are a sign that Columbia buyers are looking for premium features in a smaller package than the old full-size luxury sedan standard.  At this time, the exact features of Verano have not been announced.

What has been announced, however, is that the Verano will be built at the Orion Assembly plant in Lake Orion, Michigan.  Orion Assembly, which last built the Pontiac G6 mid-size sedan, is being retooled as part of a $145 million investment in the plant that will retain 1,550 hourly and salaried jobs at the plant as well as 120 at the nearby Pontiac Metal Center.  Add in Verano’s development, and the total investment in the program swells to $600 million.

Orion Assembly has 27 years of service, building over four million cars in its history and setting an industry record of 10 million man-hours without anyone losing a work day to injury.  It is also the first General Motors facility to be named a Clean Corporate Citizen by the State of Michigan.  GM and the United Auto Workers collaborated on innovative contractual language that will keep the plant lean and flexible, a crucial element to successful small car development.  Retooling of the plant should be complete in summer 2011.

When the 2012 Buick Verano comes to Columbia, South Carolina, you can find it at Jim Hudson Buick.  Jim Hudson has been serving Columbia Buick customers since it acquired Hancock Buick’s franchise in 2007.  Jim Hudson has been voted Best New Car Dealership by readers of The State an unmatched 10 years in a row, and has been voted Best of Columbia by readers of the Free Times weekly newspaper several years in a row.  Jim Hudson carries a full line of Buick premium sedans and crossover SUVs, as well as a variety of GM Certified Used Buick models that are exceptionally well-reconditioned and backed by great warranty protection.  Jim Hudson Buick is located at 7201 Garners Ferry Road in Columbia, South Carolina, and can be reached by phone at (803) 783-0110.  For more information, visit their Columbia Buick website or shop the current Buick models on sale now in Columbia below.

This entry was posted in Buick Verano Columbia SC. Bookmark the permalink.